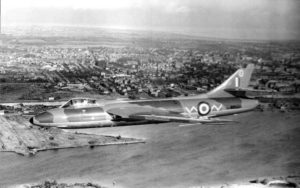 This photo of a 98 Squadron Hawker Hunter from RAF Jever was taken by The Late Brian Sharman in 1955 and published in Aeroplane magazine in October 2008. An eagle-eyed former pupil spotted that it was actually flying over our old school, of which the boarding houses on Fliegerdeich can be seen immediately behind the fin.

By chance came upon photograph by my late husband, Brian Sharman, and would be delighted to hear from anyone who knew him.
Mamie Sharman

In addition to the Videos (mentioned previously), webmaster Andy has now put all of the scanned Memorabilia onto the members’ Website. The collection can be accessed by opening the tab Official Catalogued Memorabilia.

PRS the Video, a history of PRS, is now on YouTube. Its in 3 parts, each about an hour long. You can find them by either searching Youtube for twaprsvideo or use the following links: Read more…